The eight homes located in the block bounded by 15th Street, Mariposa Avenue, 16th Street, and Bluebell Avenue (in Boulder's Lower Chautauqua neighborhood) were designated the Floral Park Historic District by the City of Boulder, Colorado in 1978. The white-painted residences and community garage, all built between 1939 and 1940, represent the first planned-unit development in the state. The project is considered a forerunner for planned housing in the western United States, and predates, by at least thirty years, other such developments in Colorado. Floral Park is also unique in that it was completely non-developer driven.

Several common monikers are associated with the Floral Park Historic District - the two most commonly heard are: "Little Russia" and "Red Square." Explanations for these nicknames include:
(1) the wide-spread belief that the original development was a Communist-inspired housing cooperative (architect James Hunter is quoted as saying that area residents at the time associated "communist overtones" with the project); (2) a reference to the red-tile roofs that are uniformly used on each of the eight houses. Even today, many Boulderites still mistakenly refer to Floral Park as a commune or housing cooperative. Regardless, Floral Park was a unique planning concept for its time and, in some measure, is emblematic of Boulder's enduring preference for the unconventional. Morris Garnsey, the original owner of 1505 Bluebell, described the block as "a congenial, yet independent group of eight families, living in a desirable neighborhood in a desirable community. Long may it flourish."

Today, the eight residences, community garage, and shared open space (The Commons) remain intact and true to their original design. The importance of open space, now a fundamental planning and design principle throughout Boulder County, was realized by the founders of Floral Park over eighty years ago.
Map of the Floral Park Historic District 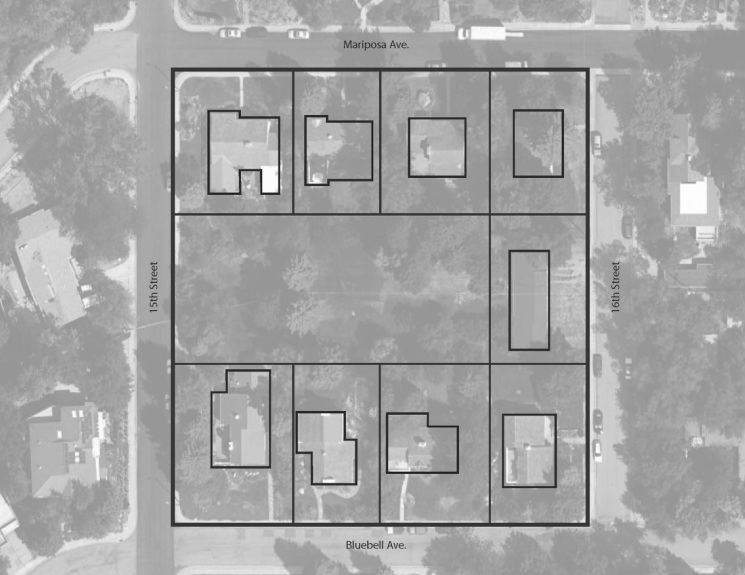